This section talks about the entries of a sentiment model.

The first, entry type, defines what type of sentiment behavior the entry is going to have. There are three possible behaviors to choose from:

It's also possible to leave this field blank for the cases where the entry by itself does not have a behavior associated.

The most common value will be POLARITY, as the most common negators and modifiers are already taken into account in the General model we provide. The only cases where you will define an entry that does not have an entry type value associated are:

For instance, in English, "good" is a word with a positive polarity, "not" is the most common negator, and "very" is a modifier that increases the strenght of the word with polarity that it accompanies. You'd left the entry type blank to define that "sentence" does not have any sentiment behavior associated, except when you talk about a "prison sentence", which can be considered negative and would be defined as a subentry.

The second field, value, selects the value associated to entries of the types POLARITY and MODIFIER.

For entries of the POLARITY type, there are the following seven values:

For entries of the MODIFIER type, there are have the following four values:

This is what you will see when you add a new entry:

If one of the values specified is not correct, you will see an error message specifying why the entry cannot be created. There are two types of errors:

For each entry created you will see its basic information: its form/lemma, entry type, value (in the cases where it applies), the number of subentries associated and when it was last edited.

In the first column of the table there are two actions associated to the entry:

Every entry created will be shown in this table, where you will be able to select how many entries to show in each page, order them by any of the columns and filter them dynamically by text appearance. This dynamic filtering will also include the aliases field, even though it is not shown in the summary.

To modify any field of an entry, you will have to access its editing view. From there, you can modify all of its information. 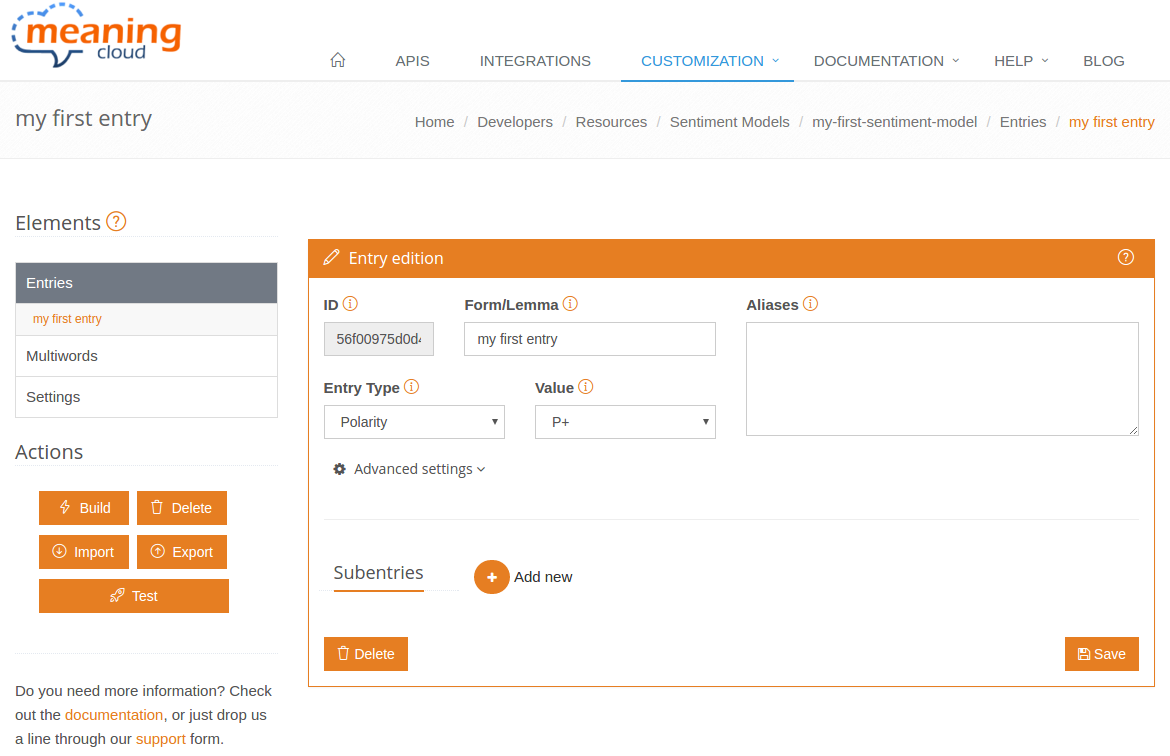 Both the sidebar and the main panel feature a question mark, , which shows a small tour that explains briefly each field.

The fields are divided in two sections:

The basic fields of an entry are ID, Form/Lemma, Aliases, Entry Type and Value (in the entry type values it applies). Only Form/Lemma, Entry type and the value(when it applies) are mandatory when creating an entry.