We have mentioned three different tools we can use to understand the sentiment analysis results obtained from the APIs: polarity_term_list, tag_stack and the syntactic image output.

There are two significant fields in the polarity_term element: the text and the tag_stack:

The text contains an abreviated text that represents the entry/subentry definition. These are the abreviations used to describe subentries:

If the entry has aliases, they will appear concatenated to the form/lemma using pipes, "|". The same applies when there is more than one context condition.

Let's see some examples with entries from the example model we provide. If we analyze the sentence "The food was very good although there were no bathrooms.", we see the following output: 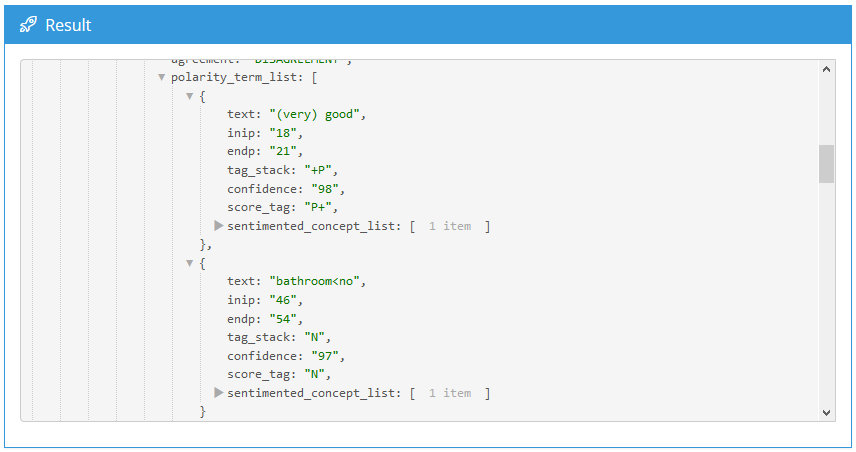 In this case there are two polarity terms, "good" from MeaningCloud's general model, and "bathroom<no" from the entry in the Restaurants model where we defined a subentry for bathroom when it goes after "no".

When an entry is affected by a modifier or a negator, it appears in the text field between parentheseses.

The polarity terms include only terms with polarity. This implies that entries with polarity NONE will not appear even when they are being applied. The same thing happens when negators and modifiers in the cases when there's not anything with polarity in the text.

There's an example in the polarity terms shown before. The first term found in the sentence, "good" is modified by "very". We know that:

We see that in the text, as it is a modifier, "very" appears between parentheses. We can also see how in tag_stack the polarity P associated to "good" is preceeded by "+" the modifier value of "very". The result of this modification is the value that appears in score_tag, that is, P+.

Through this process you will be able to see what exactly is being taken into account for the sentiment analysis of a given text and to modify your sentiment model accordingly.

When an entry or a subentry is a multiword, the polarity information associated will be shown in its first word.

As a complementary feature, the Lemmatization, PoS and Parsing API provides an output in which the morhosyntactic tree is drawn. This is very helpful in order to identify how the text is being analyzed. When the request to the API includes a sentiment model, then the sentiment behavior of the different nodes of the tree will be shown through different colors.

In the following images you can see the syntactic tree obtained for the example sentence we used before.