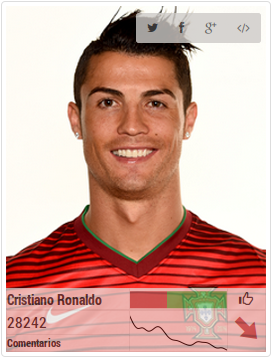 Numbat is a tool that allows viewers to get a quick visual about the overall buzz and the audience’s opinion on each character or key topic about a live event. It uses MeaningCloud APIs, combining sentiment analysis technology with entity recognition and topic extraction.

At this point, we have to face the problem of browsing and searching over the captured information. Our tool offers a simple navigation interface based upon characters, topics and time within the broadcast. Based on Elasticsearch, a search engine built on top of Apache Lucene, and its faceted search and aggregation capabilities, Numbat is able to organize the social conversation for an easy browsing, generating at the same time audience metrics and buzz charts (per minute) on a specific topic.

Using Twitter’s streaming APIs the tool analyzes each comment’s text, and by extracting and recognizing entities, it distinguishes the events and the characters they are talking about. This allows the viewer to obtain a general overview of the buzz each topic generates, as well as trending topics on each program and character, updated in real time and synchronized with the action on TV.

You can see a similar visualization of this concept in the new Twitter Reverb tool.

We are getting used to see this kind of visualizations on TV, as typing about live events in social media is getting trendy, and TVs are showing these comments on screen (with more or less real-time capabilities). But this kind of approach is based only on simple mentions of words or users. Numbat, making use of semantic analysis technology and automatic dictionary creation (in the management layer), is able not only to count mentions, but also detect polarity about the opinions of all these comments.

In addition, this tool is being developed with an eye on being able to embed each of these visualizations separately on webpages, second screen applications, video walls, etc. Because of this, it offers a great flexibility, both in terms of the platform and the type of the event to monitor. It could be a TV program or show, but also a concert, a conference, political elections…

If you are interested in Numbat, you can read a presentation about the TVX 2014 demo below.