MeaningCloud sponsors the prize to the best team at the 5th International Competition on Author Profiling Research, PAN@CLEF 2017. This competition is part of PAN (Plagiarism, Authorship and Social Software Misuse), a series of scientific events and shared tasks on digital text forensics. The 17th evaluation lab on digital text forensics will be held as part of the CLEF conference in Dublin, Ireland, on September 11-14, 2017.

Authorship analysis deals with the classification of texts into classes based on the stylistic choices of their authors. Beyond the author identification and author verification tasks where the style of individual authors is examined, author profiling distinguishes between classes of authors studying their sociolect aspect, that is, how people use language. This helps in identifying profiling aspects such as gender, age, native language, or personality type. Author profiling is a problem of growing importance in applications in forensics, security, and marketing.

Winners of the 4th Competition on Author Profiling Research 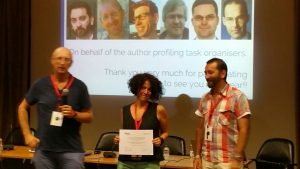 MeaningCloud has been contributing to this event sponsoring the prize to the best competing team since 2015.

The best performing team at the 2016 edition (4th International Competition on Author Profiling) was:

MeaningCloud provides building blocks for Authorship Analysis. Check out our complete Lemmatization, Part of Speech and Parsing API. It contains a myriad of functionalities derived from the full morphosyntactic and semantic analysis it carries out: