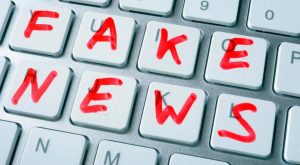 Everybody has heard about fake news. Fake news is a neologism that can be formally defined as a type of yellow journalism or propaganda that consists of deliberate disinformation or hoaxes spread via traditional print and broadcast news media or online social media. It is also commonly used to refer to fabricated or junk news, with no basis in fact, but presented as being factually accurate.

The reason for putting someone’s efforts in creating fake news is mainly to cause financial, political or reputational damage to people, companies or organizations, using sensationalist, dishonest, or outright fabricated headlines to increase readership and dissemination among readers using viralization. In addition, clickbait stories, a special type of fake news, earn direct advertising revenue from this activity.

Easy access to online advertisement revenue, increased political polarization and the popularity of social media has contributed to the relevance of fake news.  In this information society where viewers have limited attention and are saturated with content choices, fake information seems to be more appealing or engaging to viewers. It is known that online fake news spread much more quickly and more widely than real news: by 2022, people in developed economies could be encountering more fake news than real information.

From the point of view of business and regulation, there are some organizations working for developing transparency standards that help to assess the quality and credibility of journalism, such as The Trust Project or The Credibility Coalition. MeaningCloud has also invested some time, from the point of view of technology, in trying to provide a probably partial solution for detecting fake news. Below in this post we briefly describe how Text Analytics can approach this problem and present a Proof-of-Concept API developed for this specific task.

People may have a hard time figuring out what is true or false, but some hints for detecting fake news are: 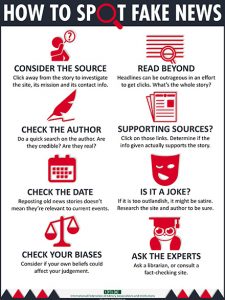 Infographic: How to spot fake news published by the International Federation of Library Associations and Institutions [source: IFLA]

For decades, AI has been successful in fighting against spam email, using natural language processing to analyze the text of messages and then machine learning algorithms to determine how likely it is that a particular message is a real communication from an actual person or instead a mass-distributed spam message.

Detecting fake news can be approached in a similar way. AI systems can evaluate the reliability (or falsehood) of a post’s text or headline, comparing different features with real (non-fake) news stories. Text processing be used to analyze the author’s writing style and determine whether a headline agrees with the article body (stance classification). Another method could examine similar articles in Internet to check whether other news media mention different facts.

Some other clues for detecting fake news can be found besides the content itself of the article. For instance, comparing the ratio of reactions versus shares on social media, or considering the credibility of the source.

There are many research studies and papers that have described a set of indicators that seem to be useful to detect fake news, focusing on different points of view of the categorization problem. Those indicators can be divided into internal and external indicators.

Internal indicators are those which can be determined by analyzing the title and text of the article without considering outside sources or metadata.

Some indicators commonly mentioned in papers are:

External indicators (or context indicators) are those which require to look outside of the article text and research external sources or examine the metadata surrounding the article text, such as advertising and layout.

Our contribution for this problem is a REST API, currently working for English and Spanish, which, given a news article (title and content), analyzes its content considering different features, and returns a falsehood score ranging from 0.0 (the article seems to be real news) to 1.0 (the article is definitely thought to be fake news).

A final score (a real number) is calculated with a combination of these previous scores, indicating the estimated degree of falsehood.

This API is in beta status and can be integrated as a validation tool in a media website, or deployed as a plugin in a browser for online checking when browsing the Internet. Using our Text Analytics platform, this could be quite easily extended to other languages.

MeaningCloud has a strong expertise in Natural Language Processing and Text Analytics, for over 20 years. Our team can tackle projects in any complex scenario with the maximum guarantees of success. If you have any question or need in these areas, please do not hesitate to contact us at support@meaningcloud.com: we will be happy to help you! 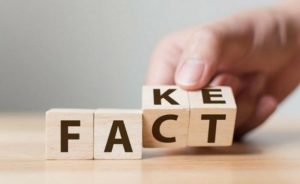