Blog
Home  /  Blog  /  MeaningCloud  /  APIs  /  Could Antidepressants Be the Cause of Birth Defects?

We agree that it is not typical at all for an Information Technology company to talk about antidepressants and pregnancy in its own blog. But here at MeaningCloud we have realized that health issues have a great impact on social networks, and the companies from that industry, including pharmas, should try to understand the conversation which arises around them. How? Through text analysis technology, as discussed below.

Looking at the data collected by our prototype for monitoring health issues in social media, we were surprised by the sudden increase in mentions of the term ‘pregnancy’ on July 10. In order to understand the reason of this fact, we analyzed the tweets related to pregnancy and childbearing. It turned out that the same day a piece of news on a study issued by the British Medical Journal about the harmful effects that antidepressants can have on the fetus had been published.

The same study excluded the adverse effects of other drugs such as Celexa, Lexapro, and Zoloft. The article mentions that Pfizer, Zoloft’s manufacturer, is being judged in response to lawsuits that relate the drug to birth defects. It seems that this was the first article being published and obtained the highest number of mentions. We have also found links to this piece of news (in Spanish) posted on the website Medciencia on July 13, which refers to that same research work. Finally, thanks to our prototype, we have also found another article on the same subject, dated July 13 too. And there are many more, but there is no need to list them all. 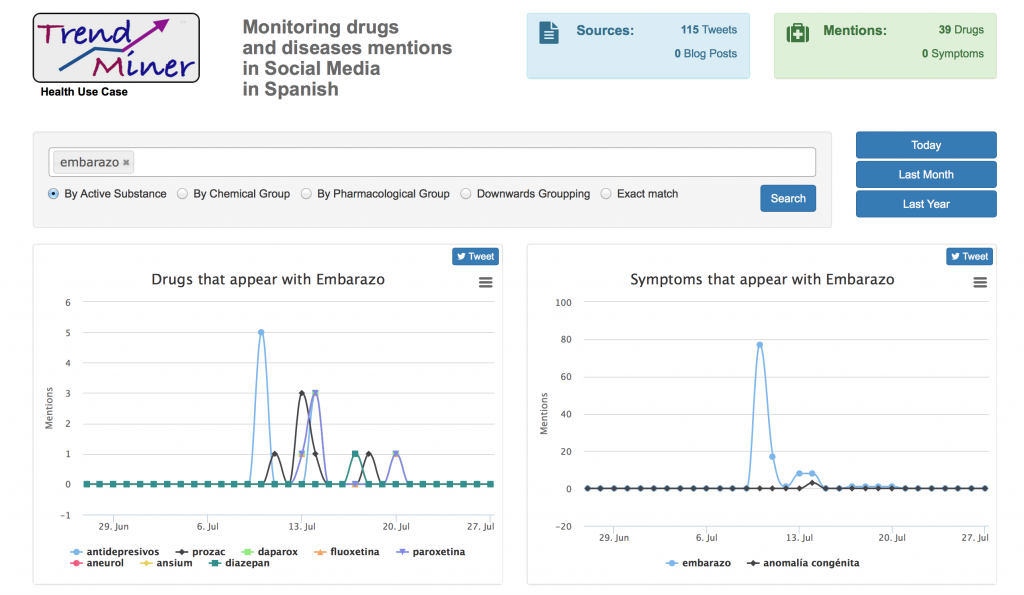 As you can see in the picture, almost 80 messages that talk about ‘pregnancy’ and some of them about ‘congenital anomaly’ (the formal term with which birth defects are known) have been collected. In the chart on the left, you can see that people mentions not only ‘Prozac’, but also ‘fluoxetine’ and ‘paroxetine’ (also known as Paxil). As we have seen, text analytics enable the automatic analysis of social media conversation, even in complex domains such as health, besides helping the justification of results. If we consider that we can do it in other languages such as English, French, Portuguese, etc., any of our customers would have the tools to obtain a huge amount of actionable data.

Would you like to know if there are other interesting relationships between antidepressants and diseases, symptoms or health conditions in general? Have a look at our prototype!