EDITOR’S NOTE: This is a guest post by Leopoldo Martínez D., a researcher and consultant on social media corporate intelligence and lecturer at UCV and IESA (Venezuela), and it was originally published on his blog (in Spanish).

As I stated in the first part of this post, I will show how online reputation evaluation was used in a real situation related to the tourism industry.

January 6-15, 2017, a music festival was scheduled to be held in Playa del Carmen, as well as a series of events related to both music and the tourism industry. On January 15, a shooting occurred in a well-known bar where people were celebrating the end of the festival.

When the shooting happened, messages quickly spread through social networks to give information and comment on the context in which the incident and how it happened. Some conversations revealed an interesting fact: The shooting was not an isolated event but stemmed from the “situation of crime that the Riviera Maya went through in 2011″.

Could this affect the Riviera Maya’s reputation as a tourist destination? Could “several years in a situation of crime” have already influenced the tourism industry’s image? These are some of the questions that the public and private actors that provide services and products in this tourist area might have been asking themselves.

Conversations were extracted from Twitter, considering the following scenarios:

Below you can see the most relevant aspects of each phase of the evaluation:

First, sentiment analysis was carried out. This analysis is measured in five polarities: Positive plus (P+), Positive (P), Neutral (NEU), Negative (N) and Negative plus (N+). Five polarities instead of three, as discussed in the first part of this post, give more detail about the sentiment that underlies a message. Messages with not polarity assigned were removed. The results of all the messages obtained with their respective polarities are below:

Then, text classification was performed. For this purpose, MeaningCloud’s Social Media model was used first to classify texts coming from social media. The categories identified allowed us to gain insight on the types of conversations that arose in both scenarios. However, for conversations as specific as the ones in scenarios 1 and 2, MeaningCloud allows you to easily build (without programming) a custom model with user-defined categories, taking the texts, phrases, and words that appear in the extracted data as criteria for classification.

For assessing online reputation, this function defines categories to classify texts that deal with the causes or effects of the problem. To this end, I defined the following categories to give shape to the model related to this specific problem using the categories obtained previously with the Social Media model as reference:

Text classification was carried out with this model, and messages with no category assigned were removed. The results of all the messages obtained with each category are below:

All the results (polarities and categories) were then combined for a more thorough analysis, showing how the polarities of messages are divided into causes and effects: 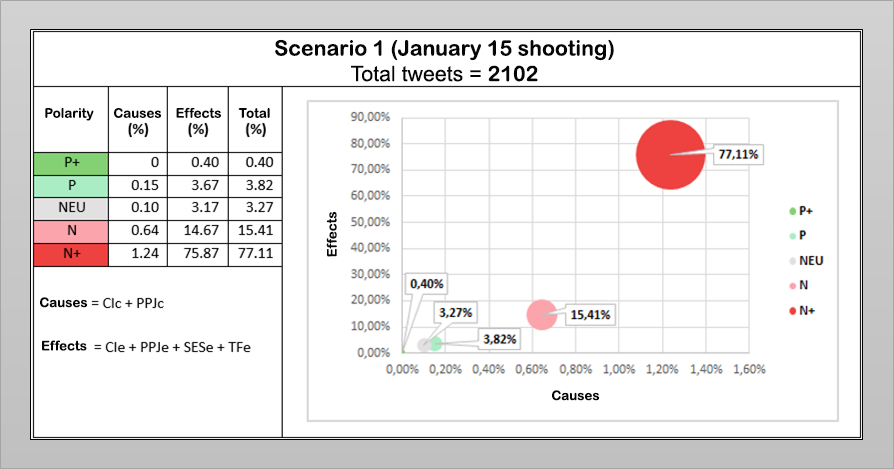 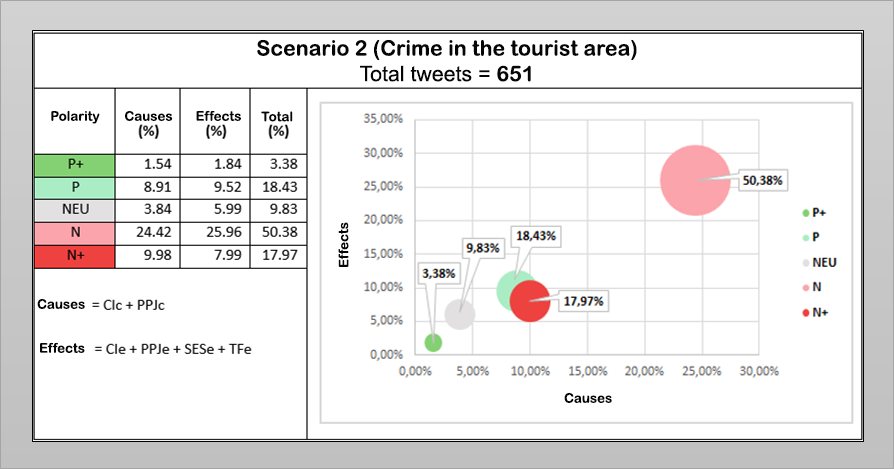 In this scenario, it is remarkable that the accumulation of N polarity (50.38%) comes from the same percentage of conversations classified as causes and effects (approximately 25% each).  Additionally, we can see that the conversations with negative polarities are equally distributed between causes ((24.42+9.98)% = 34.41%) and effects ((25.96+7.99)% = 33.95%), reflecting a concern with both the roots of crime and the consequences that it will bring about in the Riviera Maya.

The previous analyses were based on all messages for polarity features and cause or effect categories. However, this global analysis obscures details of what could have happened in the meantime while the messages were being evaluated. For this reason, for each scenario, interactive bubble charts are provided, in order to show how the conversations’ polarities that depend on causes and effects varied daily.

On January 21, 22, and 23, the causes and the negative effects of the shooting were commented on equally (bubbles moving in the middle of the chart). On the other days, there was a tendency to talk intensely about the consequences of the incident (bubbles moving close to the Y axis).

Scenario 2 (Crime in the tourist area)

The movement of the negative polarity bubbles presents varied behavior. Before the shooting, there are days in which people talked a lot about the causes (bubbles close to X) and other days when the conversation is more focused on the consequences (bubbles close to Y). However, the shooting accelerated the conversation regarding the consequences that this incident would bring about, for the future of both the festival and for the Riviera Maya.

Nevertheless, this study has led me to a few conclusions.

The methodology used in the study is an easy and practical way to evaluate the online reputation of objects or subjects. The simplicity of this methodology lies in its systematic application, represented by four phases carried out sequentially and cyclically. The practical part consists of the use of software such as MeaningCloud, which automatically performs complex tasks with no need to program. And, you can customize them to improve their performance.

On the other hand, the situations experienced both globally (crime) and locally (shooting) showed results that negatively affect the Riviera Maya’s prestige as a world-class tourist destination. Twitter interactions analyzed after December 01, 2016 reflect negative perceptions about crime’s causes and effects in the area. Negative events such as the one that occurred on January 15 amplified them.

Despite this situation, it is is still the possible to take actions to correct and anticipate the causes and the effects of the crime that caused the rise of said negative perceptions, making use of the information and knowledge as collected in this study. Thus, some methodological approaches such as digital marketing, social network analysis, and business intelligence can make use of the information and knowledge gathered to support the actions that are going to be taken.

In this way, as far as the Riviera Maya situation is concerned, the recommended actions are the following: