At MeaningCloud we aim to provide the most advanced text analytics product with the broadest language coverage in the market. That’s why before we finished 2019 we worked on launching several new language packs to increase the coverage given by our standard pack — English, Spanish, French, Italian, Portuguese and Catalan — and our Nordic pack — Swedish, Danish, Norwegian and Finnish.

The second pack we launched is the Russian pack. Russian is the official language of the Russian Federation, Belarus, Kazakhstan and Kyrgyzstan. It was the de facto language in the Soviet Union, so its use it’s also common in the Baltic States, the Caucasus and Central Asia. It’s the most common of the Slavic languages with almost 144 million speakers.

Russian is written using the Cyrillic alphabet, and although transliteration into the Latin alphabet has been common due to the technical restrictions and to the unavailability of Cyrillic keyboards abroad, it’s used less and less thanks to the Unicode extension that incorporates the Russian alphabet and the many free programs that leverage it.

MeaningCloud now provides coverage for Russian for the following functionality: 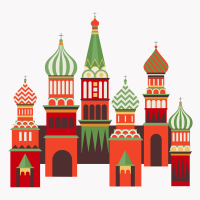 This coverage will be extended through the successive product releases depending on the market demand. Find detailed information on our new language coverage page.

There are a number of ways to refer to this task some, such as Named Entity Recognition are derived from its most popular subtasks. However, the objective is the same: extracting structured information from text.

In these images, you can see an example of the entities detected for this article. 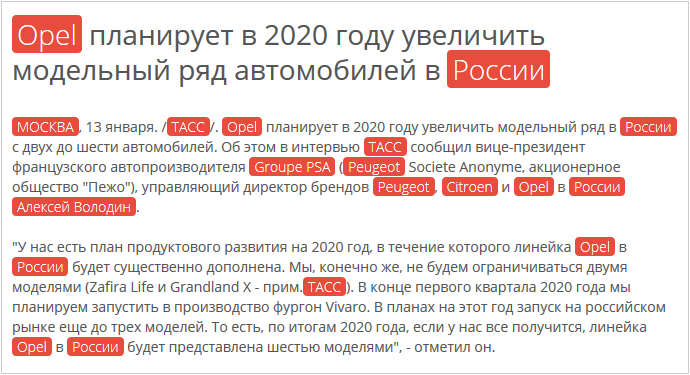 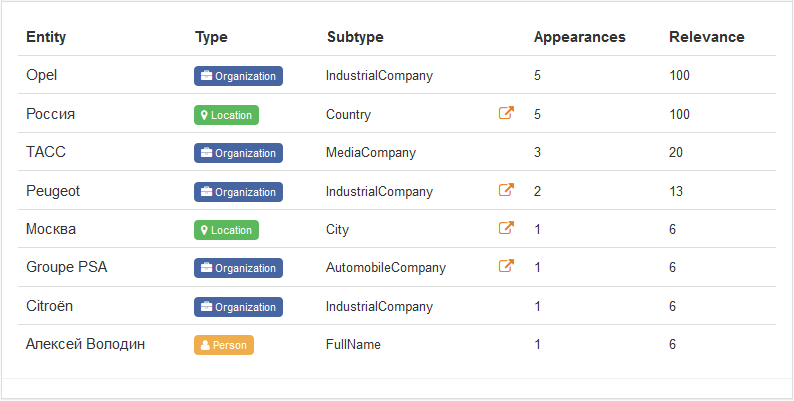 At first, it may seem that it’s just a matter of finding the names that appear in the text, but there’s a little more to it. There are many ways to refer to the same person, nicknames and variants of their name that you need to take into account. Sometimes, identifying all the named entities in a text is more than enough. For those instances, entities have a type associated, so you can choose to extract only locations, people, organizations, etc. You can check all the different types we detect in our ontology.

These are some scenarios in which Topics Extraction can be applied:

Text Clustering provides cluster analysis, the task of “grouping a set of objects in such a way that objects in the same group (called a cluster) are more similar (in some sense or another) to each other than to those in other groups (clusters)” [2].

In this case, the objects in question are texts, and the different types of analysis provided can help us discover patterns in them, either to visually sort the data or to learn new information about it and use it as feedback for other types of analysis. A possible use of Text Clustering is to apply it over the texts we are classifying using Text Classification in order to identify new categories to add to our model.

On the right, we can see the result using the “topics modeling” mode that we would obtain for some of the text we used to illustrate Topics Extraction. 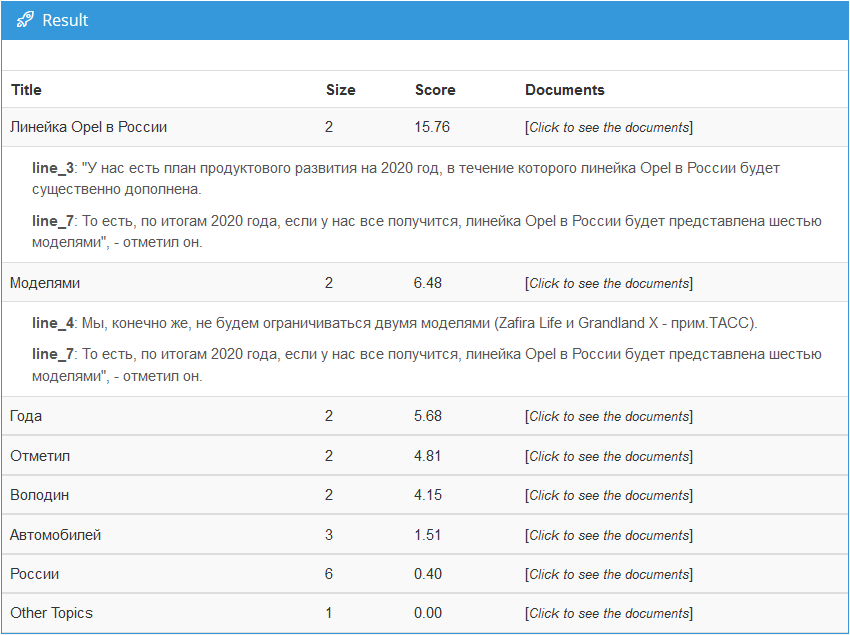 Text Clustering is generally used as a way to discover previously unknown information or new trends in text collections.

There are two possible ways to test all the functionality in Russian:

And if you upgrade to this pack for a year, you get 50% off!. Just select the “Russian Annual” pack in the upgrade process and you are set. Only available until January 31 February 29, 2020!